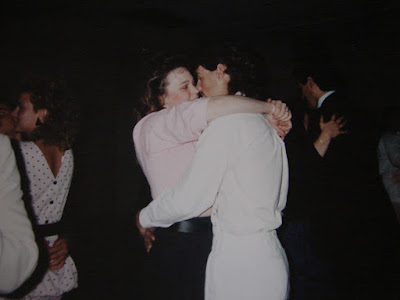 It's official, Jason and I have been together for 19 years, wow, I'm 36 so that seems like a really long time for someone my age.

We actually met when I was 16, I was dating a friend of his and I actually hung out with his girlfriend on occasion.

Then we met again a year later because he was dating my best friend(totally not compatible) that didn't last long. Here is the kicker at that time I started dating his best friend, I didn't know it at the time but then the 4 of us started hanging out.

I was still in school and I worked afternoons and he was 19 and worked full time day shift. Our friends worked nights so we just started hanging out together. We became the best of friends, the other dating came to a halt.

One night we were at a party and he was in the kitchen talking to some guys, I walked in and kissed him and the rest is history.

Jason is still my very best friend, we have an awesome marriage, we have grown up together, well he hasn't actually grown up :)
We have grown together, not apart, 19 years and growing strong!
The picture is at his cousin's wedding just a few months after we started dating.

Posted by Stephanie at 3:07 PM

Email ThisBlogThis!Share to TwitterShare to FacebookShare to Pinterest
Labels: about me

Aww, Happy 19th Anniversary to you and Jason, Stephanie! I love the story of how you met and got together. That's precious and the picture is just, well...so very sweet. I have warm fuzzies. Thank you for sharing with us. I think the world of you. I hope you two had a fabulous day celebrating together.

Penny said...
This comment has been removed by the author.
3:38 PM

Penny said...
This comment has been removed by the author.
3:39 PM

How sweet! It's much like our story, we've been together since July 1, 1985, and will celebrate 20 years of marriage next month. It's a blessing to be married to your best friend, isn't it?

(if 2 *comment deleted* show up, it was me. I just found some misspellings and couldn't edit my comment)