Brennan had his first baseball game yesterday, it was a great game, the kids played hard. Brennan had it a little rough, after he hit a grounder and ran hard to first he collided with the first baseman. Brenny flipped over the kid and landed on his leg and fell to his back. I was standing right there by first base and I opened the gate and started to go onto the field. His coaches tended to him and I just stood there in mama bear mode watching. I refrained from walking over there, I just watched like a hawk. I saw his foot come down on the bag and thought it was his ankle but it was his thigh. He got up and ran it off and he was safe too :)

A few other times he had some near misses, the ball was following him but all in all he did great. 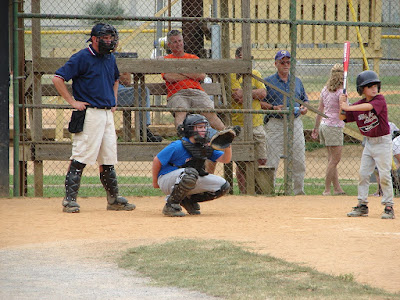 He plays catcher and rotates to first base, they even had him in center field yesterday. 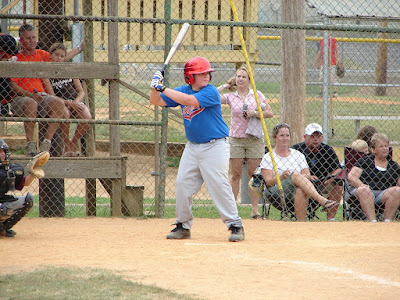 Here he is at bat before the drama started.
The coaches huddled after the game, which we won 10-7, and came over and announced that Brenny was awarded the game ball. His coach said since it was his first time playing with the team and he played hard and got the crap beat out of him, he earned it.

Email ThisBlogThis!Share to TwitterShare to FacebookShare to Pinterest
Labels: kids

Glad he didn't hurt himself too badly and was able to go on with the game! Looks like he had fun!

Glad he didn't get hurt.