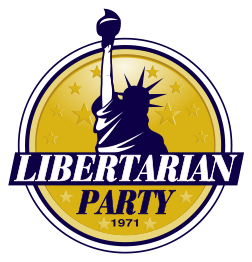 What is a Libertarian?
Let's start with Webster's definition:
libertarian: A person who upholds the principles of individual liberty especially of thought and action.

Libertarian: a member of a political party advocating libertarian principles.
Libertarians believe in, and pursue, personal freedom while maintaining personal responsibility. The Libertarian Party itself serves a much larger pro-liberty community with the specific mission of electing Libertarians to public office.
Libertarians strongly oppose any government interfering in their personal, family and business decisions.

Essentially, we believe all Americans should be free to live their lives and pursue their interests as they see fit as long as they do no harm to another.
In a nutshell, we are advocates for a smaller government, lower taxes and more freedom.

I've been saying that I lean libertarian well I have officially declared myself to be a Libertarian.
It's fitting that they were founded the year I was born.

I'm so flabbergasted by what is going on in the government right now that I'll refrain from commenting at this time.

Posted by Stephanie at 1:28 AM

Email ThisBlogThis!Share to TwitterShare to FacebookShare to Pinterest
Labels: politics

But with all the elephants; you look like a Republican! :)

I have that Libertarian sticker on my fridge.
I also thought it was cool that the party was founded the same year I was born. Too funny!